Out with SMARTnet, in with Savings

There are quite a few things in technology that can make me chuckle.  I can't count how many times I have heard the phrase: "Nobody ever gets fired for buying Cisco!".  Listen up folks, times are a changing and networking is moving much more towards a commodity model.  I dare you to ask yourself: "Who wants to save their company a million dollars and look like a hero?"

It is no secret, Cisco has been the primary player in route and switch networking.  You see it in nearly every large enterprise datacenter.  You have to pay to play.....not only upfront, but long term as well.

What people don't understand is that Cisco is not the only high-performance networking player in the market now.  HP and Dell have both taken a stand against the Cisco marketplace.  Cisco knows this, and happens to be loosing ground while the underdogs (the market I absolutely love to play in) gains new customer market share every day.

When I present Dell Networking to a heavy Cisco customer, here are some common objections I get asked:

Objection: Does Dell Networking perform as well as Cisco?  I don't believe it.

Answer: Easy, let me prove it to you.  Don't think of Dell Networking in the old terms of "PowerConnect" switching.  That is old news.  Dell switches of today are based on a acqusition of a company called Force10 in 2011. Force10 was a group of engineers that left Cisco because they wanted to see greater performance out of their switches. They have a belief that all switches should be line speed to each port. In fact, they were the first switch manufacturer in the market to prove 10Gb Ethernet switching in January of 2002.  In 2007, they announced a patent for 100Gb Ethernet switching.

Objection: I am not learning a new switching operating system.  I went to school for Cisco!

Answer: Learning FTOS (Force10 OS) is like taking a slight step off of a curb if you are used to Cisco IOS.  Nearly all commands are the same, with only slight syntax changes.  In fact, my engineers (who also have their Cisco certs) adapted to the change in OS in about an hour.  Are you a Cisco expert?  Well, you are now a Dell Networking expert.

Objection: How will it save me money?

Answer: Upfront costs of Dell Networking compared to Cisco (even when Cisco discounts huge margins out of their product), is at a minimum 2/3 the cost.  Oh, and did we mention that Dell Networking doesn't have this thing called SMARTnet?....A cost which all Cisco lovers understand all too well.  Dell switches come with a lifetime warranty.

Objection: I am taking a big risk by buying and introducing a new switching solution in my data center.

Answer: In most cases, a good Dell partner (like Cyber Advisors), can get you a switch platform for free to test and put through the paces in your data center.  Actually, we see it as a bigger risk to put all of your eggs in the Cisco basket.  Most IT business units are now diversifying their solutions in their data center to reduce risk.

Objection: (Yes I get this one often)  Ok, so if all of the above is true,  I don't want to be one of the first larger businesses to migrate to Dell Networking. I am not a guinea pig!

Answer: You aren't!  There are many larger businesses that are seeing the benefits (cost and performance) of Dell Networking.  Our engineers (pictured below) happens to be rolling out a large implementation right now.  Hi Jesse! 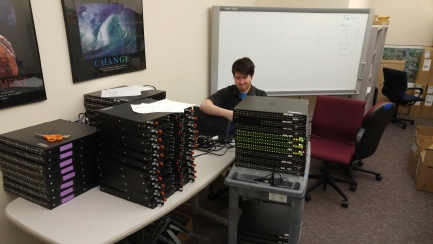 Meet with us and we can tell you so much more!