Customers that have met with me over the last 6-12 months have heard me talk about the need to protect your Office365 investment by backing up their data outside of Microsoft.  For any user who relies heavily on their email, the cost is a no brainer insurance policy.  Below is a great article by Andy Rouse, Author at Spanning (a Dell EMC company), that highlights why I have been so strongly encouraging our customers to put a solution in place.

Don’t Be a Statistic: Protect Your Office 365 Data

It’s a fact – 77% of companies that use SaaS applications have suffered a data loss, according to a recent survey by Dell EMC. That’s a lot higher than the 58% in an IDG survey a year earlier than ours. Clearly, the risk of losing data in the cloud is growing, and if your business relies on Office 365 for everyday productivity and collaboration, your risk of losing data is growing, too. But you can control that risk with data backup designed specifically for SaaS applications like Office 365.

If you’re counting on Microsoft to keep your Office 365 data secure, you’re not alone; 50% of IT decision-makers at companies said they would rely on their cloud vendor for backup and recovery of their data. That’s fine if you’re talking about preventing data loss due to a Microsoft hardware or software failure, or some sort of emergency like a natural disaster, on Microsoft’s end. They’ve built redundancies into their infrastructure that enable them to deliver the high levels of uptime and data availability they’ve promised in their SLAs – and they do a great job of it. 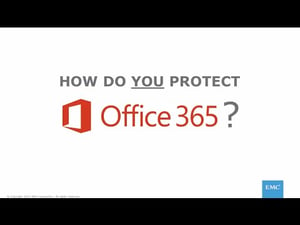 But when there’s a problem on your side, that’s a different story. For example, if someone deletes email they shouldn’t have – whether by mistake or maliciously – and then empties the trash bin, you’re responsible for that data loss, not Microsoft. After all, Microsoft has no way of knowing something shouldn’t have been deleted; they’re just carrying out their agreement to execute the commands they’ve been given. Of course, there are plenty of ways that can go terribly wrong. Here are the top 4 our survey uncovered.

If you’d rather be among the 23% of IT decision-makers that didn’t report a data loss in our survey, consider protecting your Office 365 data with a third-party cloud-to-cloud backup solution.

There are plenty of choices. Look for one that backs up your Office 365 data reliably every day, allows you or your end users to restore it instantly from any point in time if you have a loss, and automatically puts it all back exactly the way it was before – among other criteria.