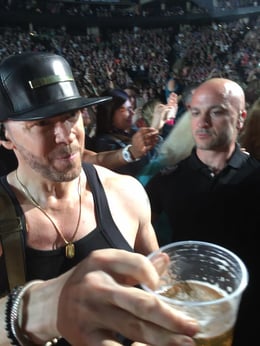 It seems to me my generation has a whole slew of songs we memorized and can sing to this day. We even know a lot of songs from our parent’s generation and can sing them without a cheat sheet of the lyrics. I have a hard time believing there are songs out today that our children will be singing in their 30’s and listening to on satellite radio as they commute to work in their driverless cars.
I could be wrong, but it seems as though we recycle songs quicker and it’s harder for musical groups and songs to stay relevant for a sustained amount of time. A writer from Slate has an interesting article on how songs from his 20’s seem to resonate in his life more than most songs.  Check out that article here.

Have you ever been to a bar when Pour Some Sugar on Me or Paradise City comes on over the juke box? Or have you been to a sporting event and Sweet Caroline starts playing. People instantly turn their fist into a microphone and begin bellowing out the chorus no matter how good or bad they sound.  Maybe I am old, but I just don’t see those types of songs today that generations will be singing 20 years from now.  Of course the juke box experience itself is already radically different with the ability to play music and create a play list straight from your phone over the bar’s sound system using TouchTunes. The City Pages had this article about the death of the juke box.

For now, TouchTunes and other apps on our phones are tied to our credit cards and debit cards or linked directly to one of our bank accounts. BitCoin has been around for a while now, but it is becoming more and more main stream. Here are a couple of link I found interesting. First- a basic You Tube video for beginners. NPR also ran this interesting audio story today on if investing in Bitcoin is a wise choice. No, it doesn’t answer the question for you, but it’s still quite interesting.